I’m the new guy here…and feeling a bit awkward and intimidated, which for me, is rare. Awkward like the guy who shows up to a dive bar in a tuxedo. But mostly intimidated by the beer knowledge so many craft enthusiasts and brewers have. I’m pretty much the dumb jock of beer – but I’ve both accepted and embraced this fact. [On a side note, I have a Master’s degree in counseling, played then coached D1 college baseball for ten years and played professional ball for a little over a season.]

So I’m not a dumb jock…but rather a dumb beer drinker. But I plan on learning and self-educating.

I mentioned in the previous introductory post that I work a few nights at a package store. This means a few things. First, I get first dibs to purchase highly sought after beers. Second, I get to see people walk in and spend inordinate amounts of money on great beer. Third, I get to hear beer geeks quibble over different beers/breweries/styles on a nightly basis. Last, but not least, I get to see people aimlessly search the beer section until I offer to help them find something specific, at which point I direct them into the walk-in cooler, where the craftier beers are.

Also, I just figured out that Brett isn’t a person whose name is on a ton of beers, but rather a wild yeast strain, which almost sounds painful. 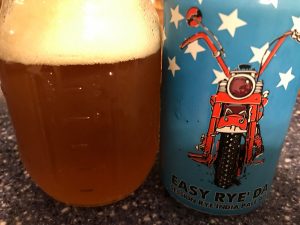 This week I remained loyal to local Connecticut breweries was thrilled with the results. Three-for-three!

You can also find Ryan enjoying fatherhood on social media: